Combining my two favourite things, breakfast and Mexican food, Lucha Libre’s brunch menu thoroughly impressed me. Lucha Libre is one of my favourite places to eat in Liverpool, and I’d never tried their brunch menu… until now.

Lucha Libre is usually our first choice for an evening meal out, so Jon and I where excited to see what Mexican twist they would do on brunch. We arrived and took a seat in one of the booths, looking over the menu and enjoying how quiet the restaurant was. Jon ordered a berries, apple & banana smoothie and even though I was very tempted by the mimosa, I settle for a freshly pressed apple juice in honor of a dry January.

After having a look at the menu Jon settled for the Maria Sabrina Benedict; a toast English muffin with poached egg, spinach mushroom and hollandaise sauce, while I decided to go all out and try a breakfast burrito. Lucha Libre do the best burritos ever, and I was not disappointed by this breakfast version: chorizo, potato hash, mushroom, omelette, Mexican beans, chipotle and frijoles all wrapped up in a tortilla wrap.

I’ve never had a breakfast burrito before it was great! I am very burrito-biased but it was really enjoyable and didn’t taste how I expected at all (I really did expect a full english crammed into a wrap). It was spicy and filling, but not too overpowering. The Maria Sabrina Benedict passed the poached egg test, and gave me a bit of breakfast envy.

Lucha Libre’s brunch menu is fab if you fancy something a bit different. I really wish they did a street food tray of the brunch menu because I’d love to try a little bit of everything. Their regular menu is amazing too, and they never disappoint.

Lucha Libre are all over the gaff, on Facebook, Instagram and Twitter. Along with a few other independents in Liverpool at the moment they’re offering 40% off the bill with the Keep It Local campaign. You can find out a bit more about that here. 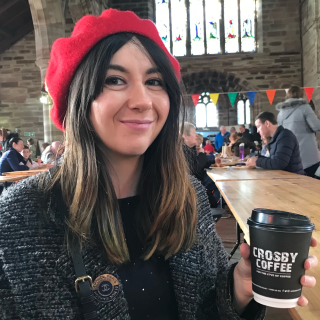